The Domestic Abuse (Scotland) Act 2018 was described as a "new gold standard" in legislation to tackle domestic abuse when it passed the Scottish Parliament. Members of the Scottish Parliament (MSPs) greeted the Act with a standing ovation directed at survivors and campaigning organisations in the public gallery. The Act created a new criminal offence of domestic abuse, covering a range of psychological, sexual, financial and physical abusive behaviours perpetrated against a partner or ex-partner. We are now at the two year anniversary of the Act coming into force (in April 2019), making it a crucial time to think about whether the new offence is living up to its promises. (Please click here to see more footage of the debate.) 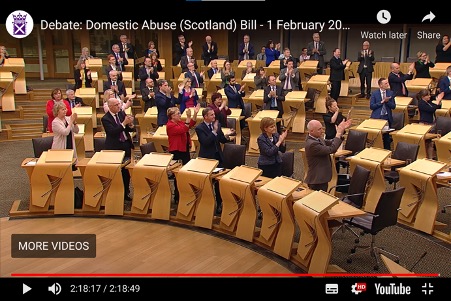 The offence is designed to provide a more effective response to domestic abuse as an ongoing course of conduct, rather than viewing it as isolated incidents. It is rooted in Evan Stark's concept of coercive control, how perpetrators limit victim-survivors' space for action through cumulative use of a range of tactics, such as isolation, regulation of everyday activities and financial restrictions. Stark's work, which was adopted as part of Scotland's overall approach to domestic abuse, recognises the structural gender inequalities that are both cause and consequence of domestic abuse.

A key aim of creating a new criminal offence was to better reflect the full, day-to-day experience of the victim-survivor, and to respond to the range of controlling behaviours that they are subjected to, rather than require these experiences to be parcelled into individual criminal offences, such as assault, vandalism or threatening behaviour. The Act sought to ensure that all aspects of domestic abuse are recognised, and that the perpetrator's behaviour was challenged and made accountable.

The Act also sought for greater recognition that children experience domestic abuse with their mothers. The offence can have a 'child aggravator' applied, in recognition that a perpetrator's choice to abuse their partner or ex-partner is also that perpetrator choosing to abuse any children. The offence recognises that children do not only witness domestic abuse, they live with that abuse, for example in restrictions on their freedom, financial restrictions and isolation from friends and family members. The Act also requires the Court to consider if a Non-Harassment Order is necessary to protect the women and children affected by the perpetrator's abuse, and explain if this is deemed unnecessary, in growing recognition that a criminal conviction for a perpetrator of abuse is only part of the solution for ensuring women's and children's safety. 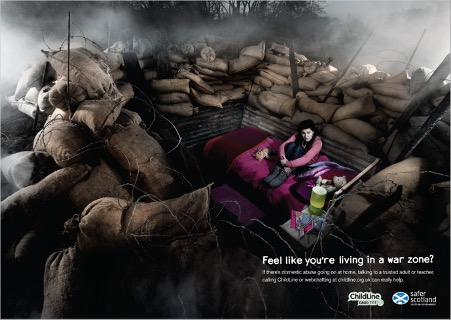 1,065 charges were reported under the new offence in its first year of operation, 3.5% of the total 30,718 charges reported that were identified as domestic abuse according to prosecution figures. (Crown Office & Procurator Fiscal, 2020). The accused was male in 88% of charges under the new offence, reflecting the gendered nature of domestic abuse. The child aggravator was recorded against 24% of charges, perhaps lower than expected given that recent crime survey data for Scotland suggest a child or children living in the household in 32% of recent domestic abuse incidents (Scottish Government, 2021). This suggests that the Act is being well used, although it is as yet too early to tell whether it is holding perpetrators to account.
Of course, these figures give us only a partial sense of how the new offence might be working. As part of the IMPRODOVA project the University of Glasgow is working with Police Scotland to understand how the Act is affecting the work of frontline police responders – whether they feel that the Act is supporting them to tackle the perpetrators of domestic abuse and the extent to which it may increase victim-survivors' access to justice. The Act contains a requirement on the Scottish Government to report on the operation of the legislation within three years of its implementation, including about the experiences of witnesses, for which both a survey of adults and specific work with children is being planned. This work is currently out for tender.